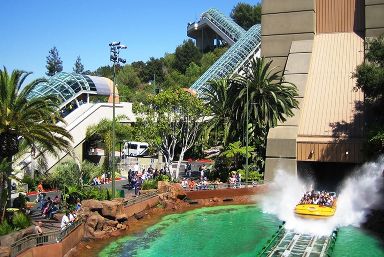 Buckle up, California is a favourite with families seeking fun for the children, pull that lap bar down and tighten that safety restraint as we introduce you to the West Coast of America with its treats and its entry to the ever increasing and demanding thrill seekers market 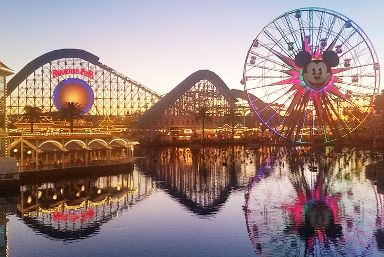 Flying direct with one of our award-winning partner airlines including Virgin Atlantic, you will arrive at Los Angeles International airport. Collect your hire car and make your way to the Fairfield Inn, Anaheim conveniently situated across the street from your first stop, Disneyland and the latest addition, Disneyland California Adventure. Opened in 1955 (the only Walt Disney Franchise under the control of Walt Disney himself) the park itself boasts the highest attendance of any theme park in the world. From careering through the snow clad Matterhorn ride (one of the original rides from the 1950s and still going today) to holding on tight in the 5th dimension on the Twilight Zone Tower of Terror, the happiest place on Earth really is home to attractions to suit from the youngest to the oldest in your party and keep everyone amused. Check out Space Mountain for a ride out of this world!

Drive the short Distance to America First Theme Park Knott Berry farm when your hotel for the next few nights will be the on-site Knotts Berry Farm Resort hotel. One of the lesser known parks to the UK market (yet ranked 13th in the Theme Park Leagues of America) it is home to what is one of the best wooden roller coasters around, Ghostrider. Thrill seekers will be amazed with Xcelartor where you accelerate from 0 to 82mph in 2.3 seconds and climb 20 stories into the air. When the thrills have taken their toll, visit Soak City, Knotts Berrys own water park to cool down and splash around in, home to numerous water slides and attractions. Oh and do not forget to try the Fried Chicken, some of the best you will every taste!

Time for a change of pace, drive to the coastal area of Redondo Beach where your home for the next few nights will be the Crowne Plaza Redondo Beach taking some time to relax on the beach. Described as The Gem of The Continent by the LA daily Herald, surrounded by the boardwalk and white sandy beaches with the waves of the Ocean, you can really lose yourself here in the tranquillity of California. With a marina, harbour and pier home to games arcades, shops, bars and an array of restaurants (of course, fish a specialty), you will have everything you need for a perfect break.

Time to drive to Universal City and your next hotel, the Sheraton Universal Hotel, ideally situated next to Universal Studios. While one of the oldest and most celebrated movie studios that is still in use today, you really do experience the magic of the movies in a thrilling environment. The signature ride is the 40 minute Studio tour where you encounter the likes of Jaws and King Kong. Try the Simpson ride for an intense simulator ride with Homer, Marge and the Gang. For those that know what a minion is, the despicable me ride is a must. You can even meet dinosaurs on your river ride through Jurassic Park with a heart pounding escape at the end. When the park closes, the city walk opens with a vast array of restaurants, clubs, bars and cinemas to keep you amused until the small hours of the morning.

Time to drive to Six Flags Magic Mountain where more coasters than any other competitor in the theme park world (this includes the infamous Cedar Point) await. Your home will be the Hilton Garden Inn Valencia, the closest hotel to the park. Records are set to be broken and Magic Mountain boasts numerous record setting achievements including the Worlds Tallest and Fastest Stand-Up Roller Coaster, the Riddlers Revenge and the worlds tallest vertical drop ride Lex Luther: Drop of Doom. The signature ride is a hot battle with the winner being X2. This ride is totally unique in that the trains seats pitch 360 degrees forward and in reverse totally independent of the main train and direction giving it the 4th dimension, one not to ride straight after Lunch! Also at Six Flags is Hurricane Harbour, their own signature water park where you can cool off with some unique water thrill rides attached if you have not had your total fix from the main park.

Probably with a few souvenir photos in hand of proof of your riding that certain ride, it is time to drive back to Los Angeles Airport, drop your car off and catch your direct flight back home. What is sure is that the theme park industry never stands on its laurels as they set and break more records every month so the future will always have something different and always a good excuse to plan on that return trip!

Get a quote for your California Theme Parks Trip